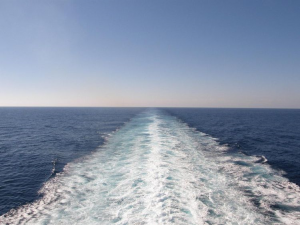 The stream of bubbles created by ships as they cross the ocean could be geoengineered to help reduce global temperatures by almost a degree in the longer term, researchers at the University  of Leeds have discovered – but only if bubbles are smaller and made to last longer.

A study looking at the effervescent trails found that the effect was likely to be significantly stronger in the Northern Hemisphere  (0.9C reduction by 2070), which has more shipping lanes, but that an 0.5C reduction in global mean temperature was possible overall.   It used a global climate model to simulate the potential of brightening ship wakes, which reflect light back to the atmosphere, discovering that these would need to be artificially enhanced by boosting bubble lifetime to achieve the temperature-lowering effect.

Julia A Crook, Lawrence S Jackson and Piers M Forster showed wake albedo could be increased by ten-fold by generating more and smaller bubbles than normally exist in wakes, but that the areal extent would also need to be increased by at least 1000-fold to have a significant effect. To achieve this with the same number of ships would require prolonging bubble lifetime from minutes to around ten days, but this could only be achieved by the addition of surfactant, a chemical that helps to stabilise microbubbles.

The authors look to the potential for surfactant to be added to achieve this, but underline the need to consider the wider implications of this form of geoengineering.  Surfactants are known to reduce gas exchange, but by how much the ocean uptake of CO2 (which also helps reduce global warming) would be affected is unknown.

The paper, which was published in Journal of Geophysical Research Atmospheres and a Research Highlight in Nature Climate Change, was covered by the Huffington Post.