A blog from Simon Lewis, Professor of Global Change Science in the School of Geography; Alexander Koch, University of Hong Kong, and Chris Brierley, UCL

What would happen if every single patch of farmland in the tropics, from Brazil through Congo, India and Indonesia, was abandoned overnight and left to turn back into forests? That’s the question we investigated in our new research. Trees and forests have become increasingly important in plans to tackle the climate emergency, yet our work shows that once you factor in how the soil, oceans and other parts of the Earth system would respond, tree planting is not as potent a solution as it may first seem.

Of course, abandoning agriculture in the tropics cannot be a solution to climate change. This was a hypothetical and idealised experiment, but one that helps us to explore how the global carbon cycle might respond to forest restoration and tree planting on a vast scale. And targeting the tropics shows maximum impact as trees grow fast there.

To investigate the question, we used the UK Met Office’s climate change model – a computer simulation of the Earth as a system in which the oceans, land and climate interact and affect each other. We simulated two futures. First, a scenario where the world takes serious action to limit warming to less than 2℃. The second scenario was identical, except all farming across the tropics was stopped and the original vegetation, mostly forests, would recover.

The difference between the two scenarios shows that the new tropical trees would store an extra 124 billion tonnes of carbon by the year 2100, or around 13 years’ worth of today’s rate of fossil fuel emissions. All this extra carbon would have been taken from the atmosphere through photosynthesis. However, carbon in the atmosphere – which matters for climate change – would drop by only 18 billion tonnes, just two years’ worth of emissions. What explains the huge difference? 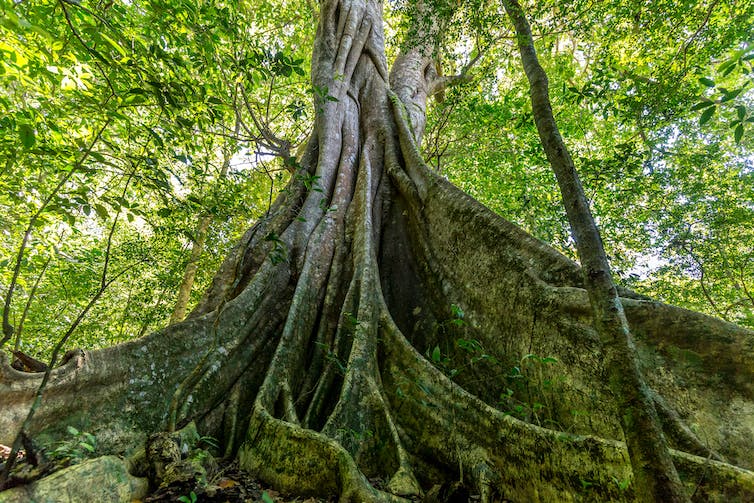 The reason is that other parts of the Earth system counteract the effect of the new tree growth. If the tropics were reforested, our model predicts that the oceans, soil and vegetation would absorb less carbon dioxide. By the end of the century, tropical trees would take up an extra 124 billion tonnes of carbon (or 124 gigatonnes, Gt), but tropical soils would take up 83 Gt less carbon, as the turnover of dead plants is much slower in forests compared with grasses and crops that die annually, meaning lower carbon inputs in forest soils and lower carbon storage.

There would be one other major change to the Earth system. The oceans slow climate change by removing carbon dioxide from the atmosphere: as CO₂ levels increase some of the extra carbon dioxide dissolves into the seawater. And in our model, the oceans would take up less carbon since the new tropical trees would lower atmospheric CO₂.

To recap: we started with new trees in the tropics taking 124 Gt of carbon out of the atmosphere. Avoiding deforestation adds a further 10 Gt. But once you subtract the carbon no longer stored in tropical forest soils (83 Gt), in soils and vegetation elsewhere (18 Gt), and in the oceans (15 Gt), you aren’t left with much. 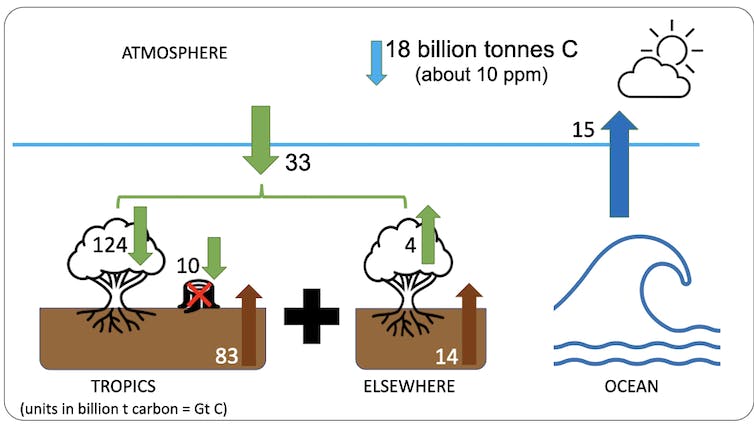 Remarkably, reforesting the tropics – after accounting for soil, vegetation, and ocean responses – results in only 18 Gt of carbon taken from the atmosphere. This is an 86% reduction from our initial extra carbon in tropical trees. This 18 Gt equates to just ten parts per million reduction in atmospheric carbon dioxide.

The Earth system works against us

What we found in our hypothetical scenario is the reverse of what is happening today. When carbon dioxide is released from burning fossil fuels, a little less than half of those emissions remain in the atmosphere and contribute to climate change. The rest are absorbed by the oceans, soil and vegetation. This has been a great free subsidy from nature.

But here is the catch: just as the amount of carbon absorbed in the land and ocean increases as we pump more carbon dioxide into the atmosphere, the reverse happens when we take it out of the atmosphere. The Earth system starts to work against us when we plant trees or use other methods of removing atmospheric CO₂.

These results are sobering. Even something as radical as reforesting the entire tropics – far beyond any plausible real-world policy outcome – would have less influence on the climate than you might think. But these results also highlight that the best way to avoid dangerous global heating is by not releasing fossil carbon into the atmosphere in the first place.