A net-zero future demands emissions capture processes that are affordable, scalable and environmentally sustainable. In the UK alone, at least 75 million tonnes of CO2 must be captured and stored annually by 2050. A spin-out company from the University of Leeds is involved in the first BECCS (bioenergy with carbon capture and storage) pilot project of its kind in the world. 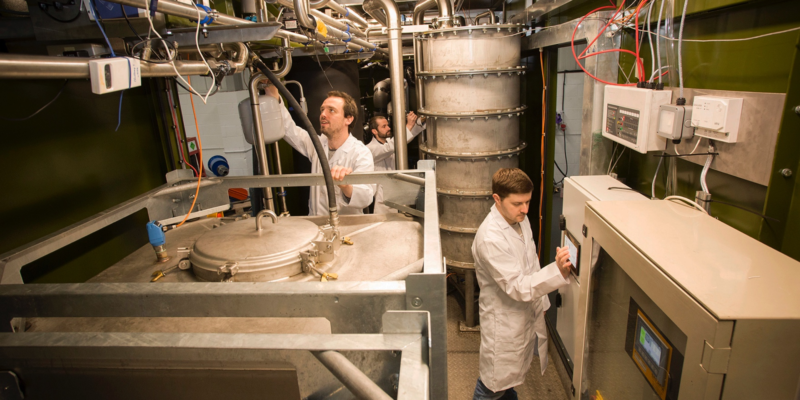 Carbon capture and storage (CCS) technology can play an important role in both reducing emissions from industrial processes and in the introduction of greenhouse gas removal technologies. For example, natural gas reforming can be combined with CCS to generate hydrogen, a very low carbon fuel for industry, building heating and transport. Greenhouse gas removal involves actively taking greenhouse gas emissions out of the atmosphere to balance residual emissions, for example direct air capture of carbon dioxide with CCS or bioenergy combined with CCS, referred to as BECCS.

CCS is widely recognised as an important technology to help the UK achieve net-zero by 2050, with the Committee on Climate Change describing it as “a necessity not an option”.

The attraction of CCS is that it can be used to prevent carbon emissions from entering the atmosphere, and it has the potential to clean up a wide variety of high emissions industrial processes, including the production of cement, steel and hydrogen. By burying emissions in long-term geological storage, such as old oil and gas reservoirs, unmineable coal seams and saline aquifers, carbon can be locked away to ensure it does not contribute to rising global temperatures.

However, current approaches to CCS use amine-based solvents to chemically absorb CO2, a process which is energy intensive and significantly reduces the overall efficiency of power stations. In addition, amine solvents pose environmental challenges, as they can produce large volumes of hazardous material that requires safe disposal. These issues need to be addressed to improve the viability of CCS as a sustainable option for achieving net-zero ambitions.

The exciting thing about our technology is that it could be applied to a broad range of industries, which are responsible for a significant proportion of UK emissions

Researchers at Leeds, led by Professor Chris Rayner, have developed an innovative chemical process for CO2 removal, which outperforms previous techniques both in terms of efficiency and environmental profile.

C-Capture is involved in a two-year demonstration project of bioenergy with carbon capture and storage (BECCS) at Drax Power Station, having secured £5 million funding from UK government. The project uses biomass to fuel the power station, with C-Capture’s technology able to capture the resulting emissions, which can then be stored underground.

Professor Rayner said: “Our aim at Drax is to demonstrate that we can not only generate electricity in a carbon neutral way, but even get towards carbon negative, where we are drawing down carbon from the atmosphere.

“The most exciting thing about our technology is that it could be applied to a broad range of industries, which are responsible for a significant proportion of UK emissions.”

Scaling up the technology at the Yorkshire facility will establish the world’s first negative emissions power station, effectively removing CO2 from the atmosphere whilst producing energy.

If you are interested in using C-Capture’s technology to capture CO2 from your industrial process, get in touch and see how their innovative technology might benefit your business. Chris Rayner is founder of C-Capture and Professor of Organic Chemistry in the School of Chemistry. He has over 20 years of experience in alternative solvent technology/green chemistry, particularly the utilisation of carbon dioxide as a reaction medium and in post reaction processing. He is also co-founder of Keracol Ltd., another spin-out, which utilises renewable waste materials to develop sustainable new ingredients for use in personal care products, sold under the Dr Craft brand.
Staff profile