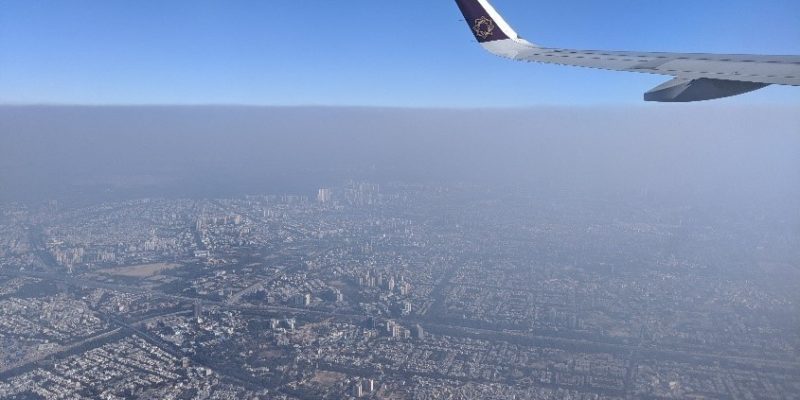 If you had told me five years ago that I would become a fog expert, I would have denied your claim straight away. And yet five years ago, I received an offer to do a PhD in Meteorology at the University of Leeds on the subject of fog! As my background was in mathematics, I had become accustomed to modelling complex systems, sometimes without any physical context. The greatest appeal for me accepting my PhD offer was that I could gain a stronger insight of what it’s like to translate observational studies to models, therefore developing a better understanding of processes in our atmosphere.

The Weather and Climate Science for Service Partnership (WCSSP) Programme comprises of projects (such as WCSSP India) to develop partnerships harnessing scientific expertise to build the basis for strengthening the resilience of vulnerable communities to weather and climate variability, supported by the UK government’s Newton Fund. WCSSP India is a collaborative initiative between the Met Office and the Indian Ministry of Earth Sciences (MoES).

Following the completion of my PhD last Autumn, I have extended my research on fog at the University of Leeds by undertaking a research fellowship as part of the Fog Over the Indo-Gangetic plains of India (FOGGI) project. In collaboration with the University of East Anglia, FOGGI aims to understand how modelling of physical processes linked to the fog life cycle could result in improved fog forecasts, and is an activity within the larger WCSSP India project. As part of FOGGI, myself and members of the project were given the opportunity to attend the first WCSSP India annual science workshop at the Indian Institute of Tropical Meteorology, Pune in February 2020. However, before I discuss the workshop, I would like to explain why fog is a crucial problem to study. Whenever I ask someone to name a type of weather event that happens in India, fog is never their first answer. And yet, during the winter months, large regions of northern India are susceptible to severe fog. These fog cases lead to poor surface visibility and can last for days at a time, causing huge impacts on human health and safety. Fog formation generally occurs nocturnally in the presence of a high pressure system, combined with the local environment being saturated.

However, a determining factor of the fog’s intensity is the influence of aerosols during the fog’s evolution. Aerosols are small airborne particles that allow for fog droplet formation. These droplets are capable of interacting with longwave radiation in the atmosphere, leading to the fog layer deepening and surface visibility worsening. As a large source of these aerosol particles in this region come from the large anthropogenic emissions from transportation, industrial and household source, understanding the role of aerosols during the fog’s evolution will lead to improvements in the forecasting of future fog episodes. This will result in better planning for the aviation industry, as well as informing the public on the onset of extremely dense fog and how to avoid it.

One of the reasons I was excited to attend the WCSSP India workshop is because by passing through Delhi to get to Pune, I would potentially witness for myself the severity of the bad surface visibility due to the fog. And sure enough, as our flight aimed to land, thick fog caused the pilot to loop around the region several times, letting us feel the direct impact of these fog episodes described in both the news and literature. In addition, the majority of the severe fog in this region is linked to high levels of pollution. Experiencing this episode even for just a few hours meant that I could attend the meeting in Pune with a focused mindset of the problem we were trying to address in the WCSSP India project. The WCSSP India science workshop provided plenty of opportunities to network with other scientists working across the project, who all had the objective to improve our understanding of different weather impacts across India. It was useful to see how my work fits into the wider context, both in my project and in the understanding of tropical meteorology on the whole. I enjoyed the opportunity to showcase my science through a poster session and although my work is in its early stages, having the platform to conduct knowledge exchange with my colleagues allowed me to clarify the direction that I would take.

I was also able to engage in conversation with scientists who took part in the Winter Fog Experiment (WIFEX) field campaign based at the Indira Gandhi International Airport. Through these discussions, I was able to find out how their data could be beneficial to my work, as well as building relationships with scientists potentially leading to future collaborations. I have continued these discussions and we are currently mapping out how future work will be conducted.

Overall, I am glad to have attended the science meeting in Pune, India. Despite it being an intense week, having the chance to experience the impacts of fog, visit new areas of the world and form new relationships will help me both as a person and a scientist.