There are many reports based on scientific research that talk about the long-term impacts of climate change — such as rising levels of greenhouse gases, temperatures and sea levels — by the year 2100. The Paris Agreement, for example, requires us to limit warming to under 2.0 degrees Celsius above pre-industrial levels by the end of the century.

Every few years since 1990, we have evaluated our progress through the Intergovernmental Panel on Climate Change’s (IPCC) scientific assessment reports and related special reports. IPCC reports assess existing research to show us where we are and what we need to do before 2100 to meet our goals, and what could happen if we don’t.

While some climate projections do look past 2100, these longer-term projections aren’t being factored into mainstream climate adaptation and environmental decision-making today. This is surprising because people born now will only be in their 70s by 2100. What will the world look like for their children and grandchildren?

To grasp, plan for and communicate the full spatial and temporal scope of climate impacts under any scenario, even those meeting the Paris Agreement, researchers and policymakers must look well beyond the 2100 horizon.

In 2100, will the climate stop warming? If not, what does this mean for humans now and in the future? In our recent open-access article in Global Change Biology, we begin to answer these questions.

We also modelled vegetation distribution, heat stress and growing conditions for our current major crop plants, to get a sense of the kind of environmental challenges today’s children and their descendants might have to adapt to from the 22nd century onward. 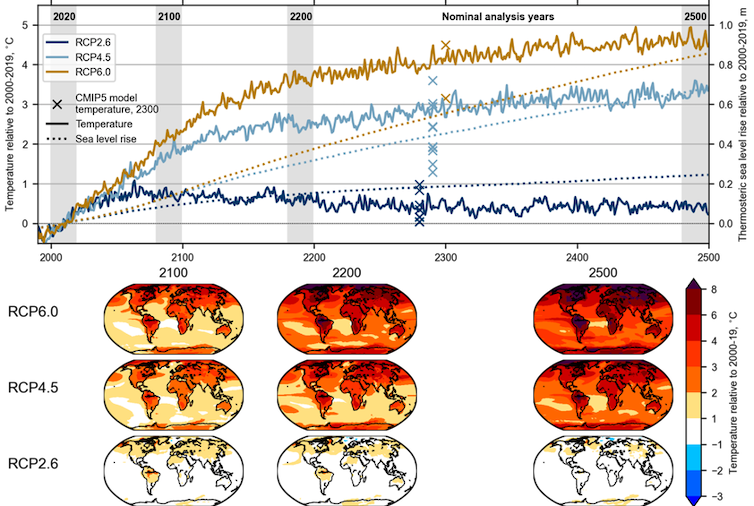 In our model, we found that global average temperatures keep increasing beyond 2100 under RCP4.5 and 6.0. Under those scenarios, vegetation and the best crop-growing areas move towards the poles, and the area suitable for some crops is reduced. Places with long histories of cultural and ecosystem richness, like the Amazon Basin, may become barren.

Further, we found heat stress may reach fatal levels for humans in tropical regions which are currently highly populated. Such areas might become uninhabitable. Even under high-mitigation scenarios, we found that sea level keeps rising due to expanding and mixing water in warming oceans.

Although our findings are based on one climate model, they fall within the range of projections from others, and help to reveal the potential magnitude of climate upheaval on longer time scales.

To really portray what a low-mitigation/high-heat world could look like compared to what we’ve experienced until now, we used our projections and diverse research expertise to inform a series of nine paintings covering a thousand years (1500, 2020, and 2500 CE) in three major regional landscapes (the Amazon, the Midwest United States and the Indian subcontinent). The images for the year 2500 centre on the RCP6.0 projections, and include slightly advanced but recognizable versions of today’s technologies. 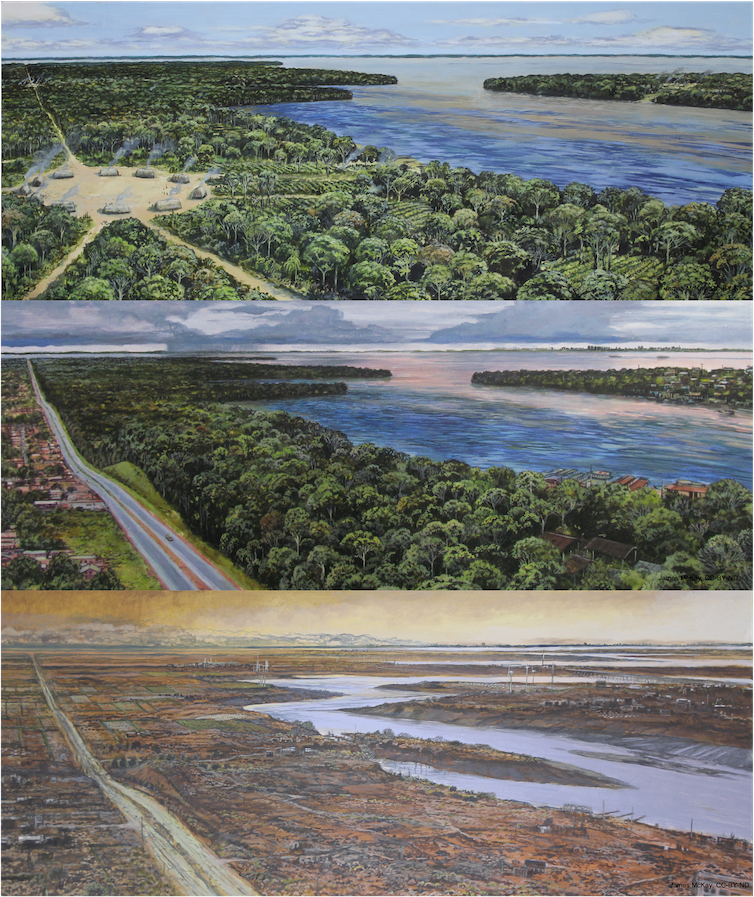 The top image shows a traditional pre-contact Indigenous village (1500 CE) with access to the river and crops planted in the rainforest. The middle image is a present-day landscape. The bottom image, considers the year 2500 and shows a barren landscape and low water level resulting from vegetation decline, with sparse or degraded infrastructure and minimal human activity. (Lyon et al., 2021), CC BY-ND 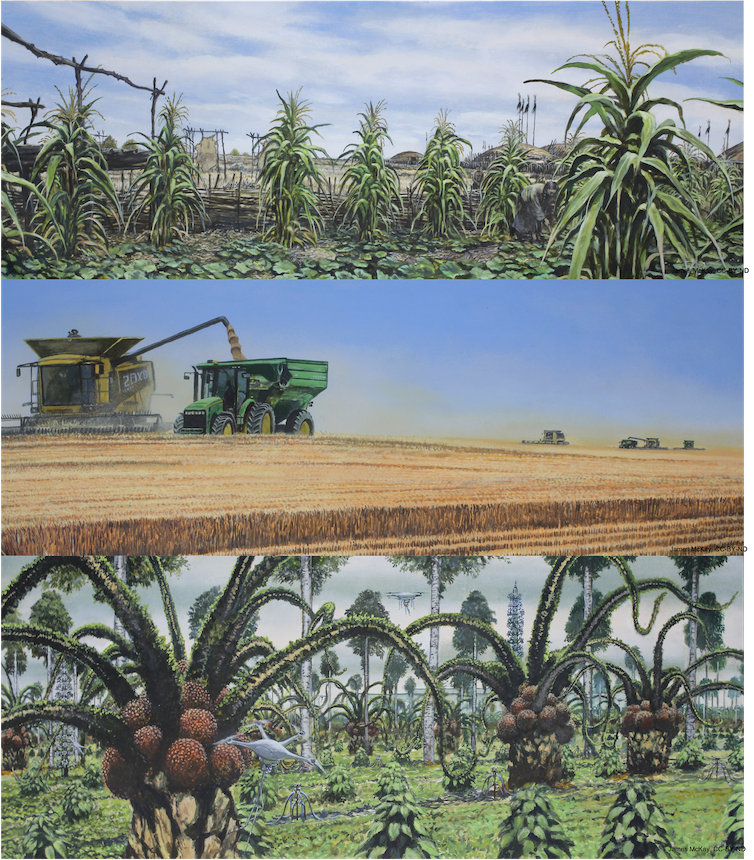 The top painting is based on pre-colonisation Indigenous cities and communities with buildings and a diverse maize-based agriculture. The second is the same area today, with a grain monoculture and large harvesters. The last image, however, shows agricultural adaptation to a hot and humid subtropical climate, with imagined subtropical agroforestry based on oil palms and arid zone succulents. The crops are tended by AI drones, with a reduced human presence. (Lyon et al., 2021), CC BY-ND 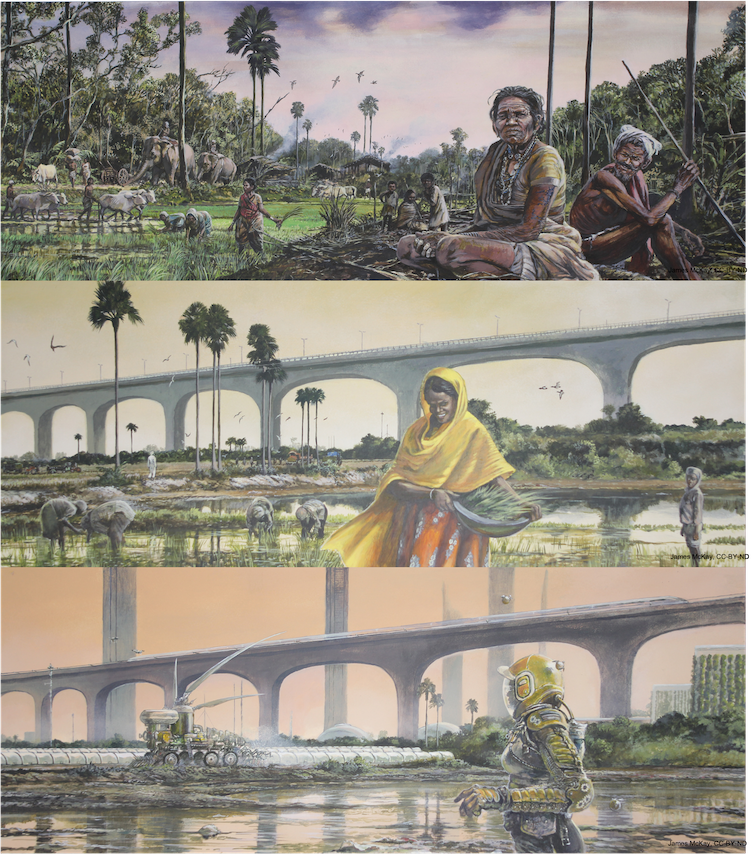 The top image is a busy agrarian village scene of rice planting, livestock use and social life. The second is a present-day scene showing the mix of traditional rice farming and modern infrastructure present in many areas of the Global South. The bottom image shows a future of heat-adaptive technologies including robotic agriculture and green buildings with minimal human presence due to the need for personal protective equipment. (Lyon et al., 2021), CC BY-ND

Between 1500 and today, we have witnessed colonization and the Industrial Revolution, the birth of modern states, identities and institutions, the mass combustion of fossil fuels and the associated rise in global temperatures. If we fail to halt climate warming, the next 500 years and beyond will change the Earth in ways that challenge our ability to maintain many essentials for survival — particularly in the historically and geographically rooted cultures that give us meaning and identity.

The Earth of our high-end projections is alien to humans. The choice we face is to urgently reduce emissions, while continuing to adapt to the warming we cannot escape as a result of emissions up to now, or begin to consider life on an Earth very different to this one.