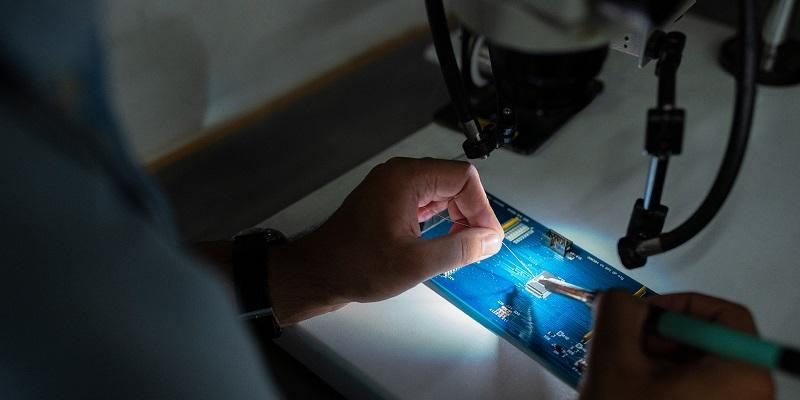 Scientists at the University of Leeds have pledged to develop a new generation of ultra-efficient electronics to help the UK achieve net-zero carbon emissions by 2050.

The growth in digital technologies, smart phones, smart grids, electric vehicles and renewable energy will result in a dramatic increase in electronic devices. It has been estimated that there will be almost 30 billion networked devices in operation within three years.

Those digital devices come with a carbon cost – not only from the materials used to manufacture them but also the energy needed to power them. The solution is to develop electronic devices that are ultra-efficient and use very low levels of power.

Professor Edmund Linfield, the Director of the Bragg Centre for Materials Research, said: “The net-zero target will drive change across the electronics sector. It will see the UK become a centre of manufacturing and innovation excellence.

“We are already working with industrial partners to develop collaborative research which will see new ideas, technologies and approaches adopted more quickly.

“Having policies that set power-consumption targets, and support the circular economy through end of life considerations will also be a critical factor in establishing an environment where the UK takes a leading position in the development of low-loss electronics.”

The role that Leeds is playing in developing greener electronics is part of a broader strategy adopted by the UK’s leading materials research organisations to reduce the reliance on carbon.

Scientists respond to the net-zero challenge

In May 2019, the UK Government announced its commitment to achieve net-zero by 2050.

In response, the Henry Royce Institute, a partnership of nine-leading institutions involved in advanced materials research – which includes Leeds – along with the Institute of Physics and the Institute for Manufacturing at the University of Cambridge convened a series of meetings to identify ways academic and industry researchers could help deliver affordable and reliable green technology.

The result of that collaboration is five technology ‘roadmaps’ which describe how developments in a number of key research areas could play a significant role in reducing greenhouse gas emissions. Those roadmaps cover:

The researchers also made a series of recommendations, including calls for more investment in materials research and testing facilities, new laws to ensure the uptake of new green technologies and for sustainability to be at the heart of any new advanced materials.

They also said there needed to be additional skills training to ensure there were enough researchers to work in the sector.

The technology roadmap for low-loss electronics was co-ordinated by Professor Linfield and Dr Katharina Zeissler and Dr Oscar Cespedes, both from the School of Physics and Astronomy. The initiative has the support of CSconnected, a research and technology organisation representing the semiconductor industry.

Baroness Brown of Cambridge, Julia King, the chair of the Henry Royce Institute, added: “The UK Government’s legally-binding target to reach net-zero emissions by 2050 will mean a huge scale up in our actions – as industries, companies and individuals.

“Making the transition to cleaner, greener energy that meets the growing needs of multiple UK sectors from transportation to utilities, and the individuals they serve, while at the same time reducing our waste streams, will require continued industry innovation and Government support and intervention.”

The Bragg Centre for Materials Research at the University of Leeds is a centre of excellence in advanced materials research. It brings together scientists and technologists from a range of discipline to work on developing new materials and improving existing materials. It is one of the nine research institutions that is part of the Henry Royce Institute.

Please join us for this exciting & timely discussion on the politics of global climate change f… twitter.com/i/web/status/1…”

“RT @PriestleyCentre: We're all experiencing the cost of living crisis at the minute, but did you know that it is connected to climate ch… twitter.com/i/web/status/1…”